Review: Shaun The Sheep: We Wish Ewe A Merry Christmas 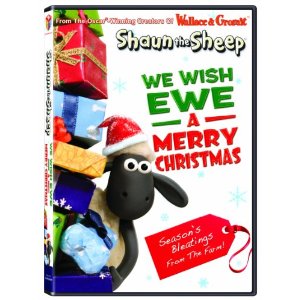 My kids love the Shaun the Sheep shorts on Disney Junior. They always get mad when it's over, so they were excited to receive We Wish Ewe A Merry Christmas, which includes BRAND NEW adventures with Shaun and his friends!

This DVD include 7 great episodes to get you and your kids into the holiday spirit! This is a must have for your little Shaun the Sheep fan!

Celebrate with Shaun the Sheep™ as he revels in his first holiday-themed DVD in Shaun the Sheep: We Wish Ewe A Merry Christmas arriving on DVD October 18, 2011 from
Lionsgate and HIT Entertainment. The sheep make sure The Farmer isn’t alone on Christmas, help to free him from his snowed-in house, take care of Bitzer, find him the perfect new hat and make merry in these seven hilarious episodes -- the perfect way to join Shaun and his barnyard buddies in ringing in some holiday “shear”!

Five minute shorts of the series currently air in the U.S. on the Disney Channel and the series ranks in the top five animated shorts on the network!

‘Tis the season to be woolly, with Shaun the Sheep and his farmyard friends. Frolic with the flock as they decorate the farmhouse for The Farmer, watch Bitzer and Pidsley battle for a spot by the fire, join a massive snowball fight and much more in these seven hilarious episodes from the Oscar®-winning creators of Wallace and Gromit™.

You can purchase Shaun the Sheep: We Wish Ewe A Merry Christmas on Amazon for $10.99!

Disclosure: I received the products mentioned above for this review. No monetary compensation was received by me. This is my completely honest opinion above and may differ from yours.
Posted by Davney at 8:33 AM

Click HERE to find out how to get unlimited entries into every giveaway!